Check out the creative side of Budapest at Paloma | Budapest Local

Today it might be hard to believe, but Kossuth Lajos Street used to be the shopping street of Budapest where people bought everything they needed. However, as shopping malls became more and more popular in the ’90s, Kossuth Lajos Street became less and less appealing and now it is just another big street with massive traffic and struggling stores. But luckily there is a great project now called Paloma that definitely brings back the golden age of Kossuth Lajos Street.

Paloma that was originally the name of a shopping center in the ’90s, was reopened this summer with a completely different concept: it is now a contemporary creative project with design stores and gallery spaces. I asked the founder, Zsuzsanna Kárpáti about the concept, but we also talked about the Hungarian design scene and of course about her favorite places in Budapest. 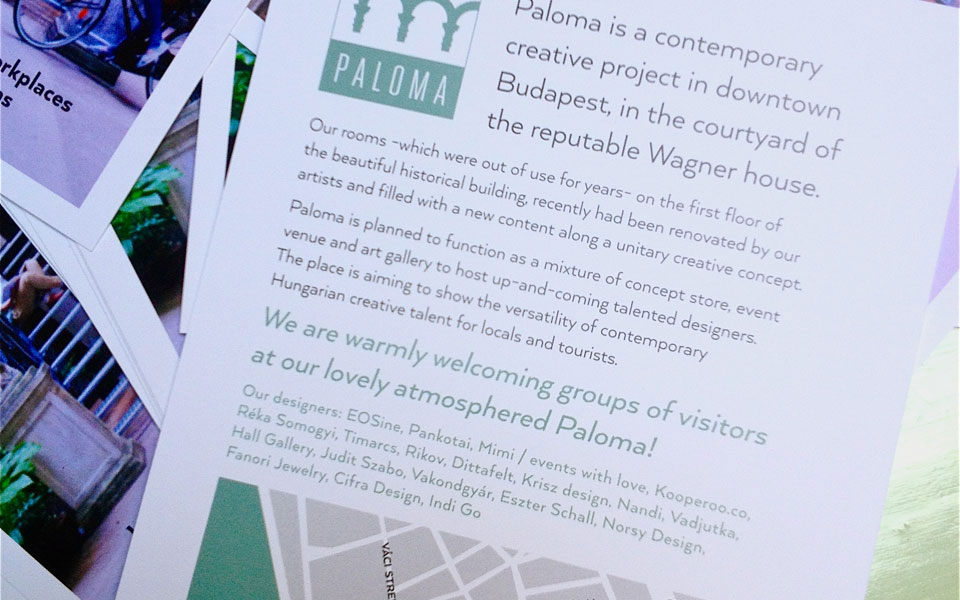 How did you come up with the idea of Paloma?

For five years, I worked at Krea, an art school. My summers were free and last spring, I thought it would be really cool if I could put together a pop-up design store for the summer months. Through my work, which was in the 5th district, I had contacts at the local government, and they suggested me to take a look at the Wagner house, which had a lot of empty premises on its mezzanine.

However, as it quickly turned out, the building was not really suitable for the pop-up concept not only because the rooms were in a pretty bad condition but also because it would have been very difficult to bring people in, given the fact that there was practically no visibility from the street.

However, when I first came to see the building, I fell in love. It was dirty and only three stores were open on the ground floor, but still the atmosphere of this place was very special.

By the end of the summer, it was clear that the project was not going to work out because I couldn’t see how it would work financially. Then the Budapest Design Week came in October and I met other people from the local government, and so once again I started thinking about the project and about how I could make it work. Back then, I already knew that I wanted to leave my job at Krea, so I decided to go for it, and make something out of this building. 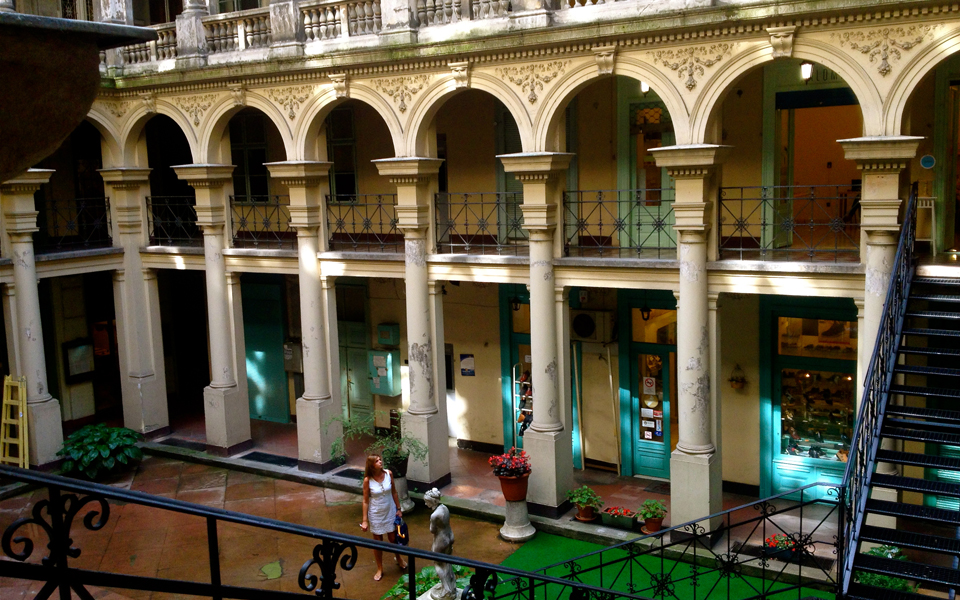 How did you finalize the concept?

I was sure about one thing: I wanted to create something related to design and art because nothing else would have better fit this beautiful building. First I had an idea about some kind of museum, but the final concept was born in March, 2014 following a three-day open house. Those three days were basically about brainstorming.

My museum idea was not very popular, but many designers started asking me if they could actually rent a space here. I liked the idea, but I also knew that some kind of gallery space with happenings would be also essential if I wanted to bring people in.

I’m assuming the designers were very happy that they had a chance to open their own space.

Interestingly enough, those designers who first asked me if they could open their stores here are not part of Paloma today. When I finalized the concept, I was very strict about one thing: I told the designers that they had to be here during the day in order to be accessible to their customers.

It was a discouraging condition for many designers. That’s why I also told them to try to rent a space together and come up with a good schedule, so that they didn’t have to be here all the time. The rents are very low, if several designers rent a space together, they can make a nice little monthly extra income. 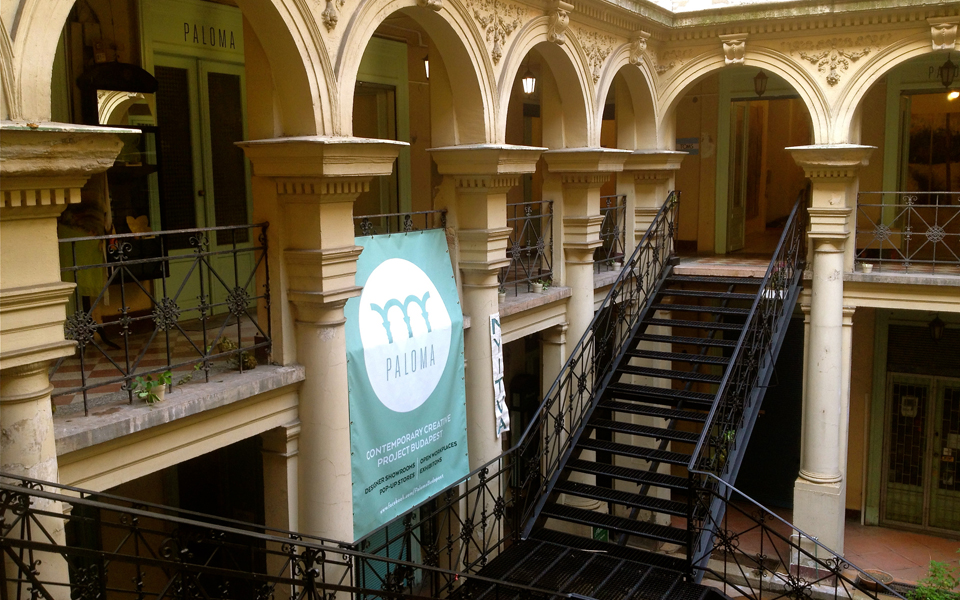 Why is it so important in the concept that the designers at Paloma are accessible to their customers?

I believe that designers need to develop some kind of relationship with their customers to get instant feedback from them, to know what they do right, what’s needed and what should be changed. And it’s especially true if the product is an everyday object, such as a bag or jewelry.

However, I also think that customer have to be more active in developing these relationships. I’ve already noticed that Hungarian customers are more reserved and shy than foreigners.

Here at Paloma, some designers work in the store. When a foreign customer comes in, they start asking questions about how a specific work phase is done. When a Hungarian customer sees a designer doing some actual work on the spot, they say I’m sorry I don’t want to disturb you. 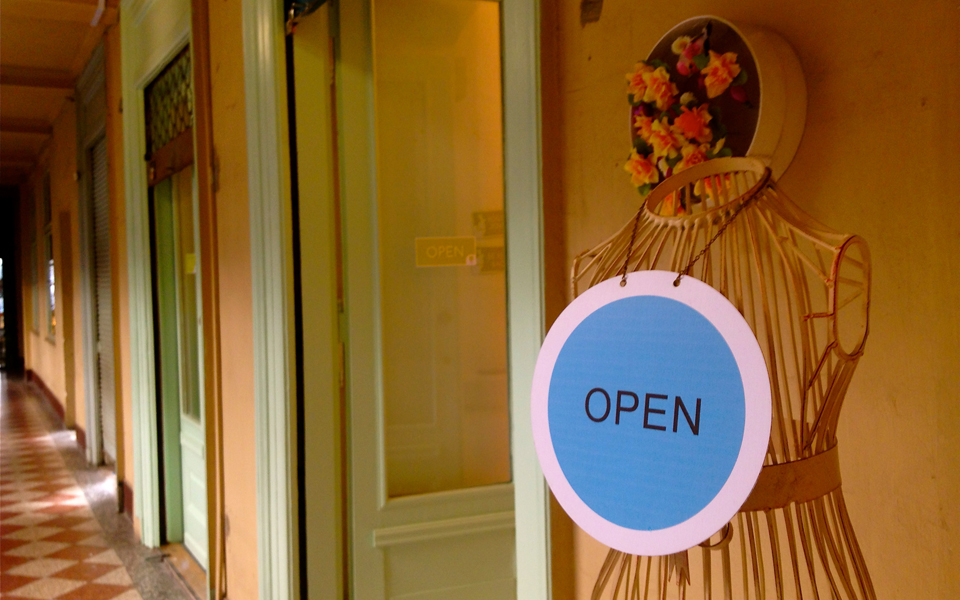 So you’re saying that the concept of Paloma is also about facilitating the process of bringing design to people’s everyday lives, just like the motto of the Helsinki World Design Capital in 2012. Even their promo film featured a lot of everyday design objects.

Yes, absolutely. And what is great about Paloma is that people are not afraid to come here, as they would be in some fancy design store. Also if they come to visit one designer they check out the other showrooms, too.

Another advantage of Paloma is that the designers form a little community; since the stores are next to one another, it’s easy for the designers to talk to each other and to get to know each other, to share ideas and contacts. And what’s more, we even share the cost of our promotional materials, like the billboard on the street. 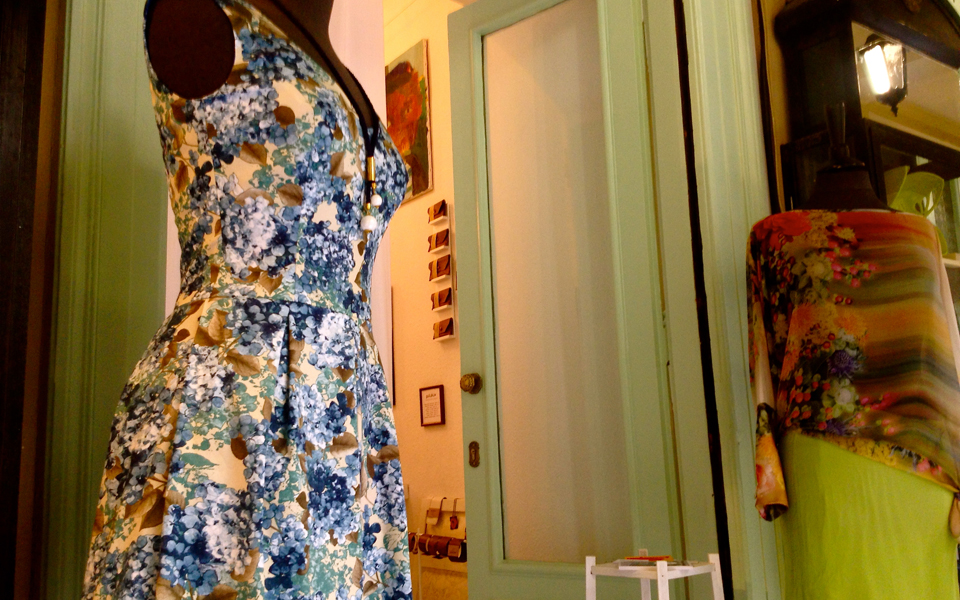 You mentioned that the building was dirty and needed quite a bit of fixing up. How did you manage to do all this?

Well, it’s a business, so I had to cover all the initial expenses, including the graphic designer’s work, the banner and some renovation work, for which I had to higher professionals. Then some of the designers chipped in and I also found some sponsors, such as Trilak, who gave us the paint for the doors, so our job was “only” to paint those doors.

Now, every month we have a meeting where we decide together on what we should spend money and then we all contribute with a certain amount. But I’m the one who makes the major decisions and therefore it’s very important that the designers trust me. 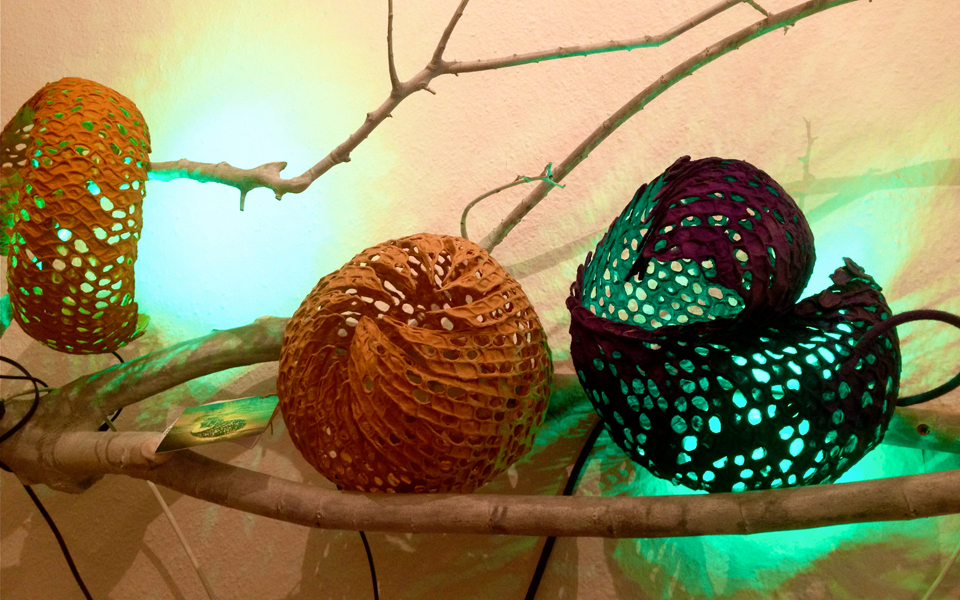 Who are the designers at Paloma?

A goldsmith workshop is about to move in on the ground floor and there is also Fiser Bag that has been in the building for a long time and they decided to join Paloma. We also have two gallery spaces that take up half of the whole Paloma area. That’s where we organize events, but we also offer these spaces to companies for events, such as press conferences, book reviews, or even smaller company events.

The two galleries are great for design workshops, activities for their employees, or a pop-up store can also move in for 1-2 weeks. But these rooms are also perfect for smaller lectures, workshops, for example in September we will have an inspirational workshop with a famous Hungarian fashion designer. 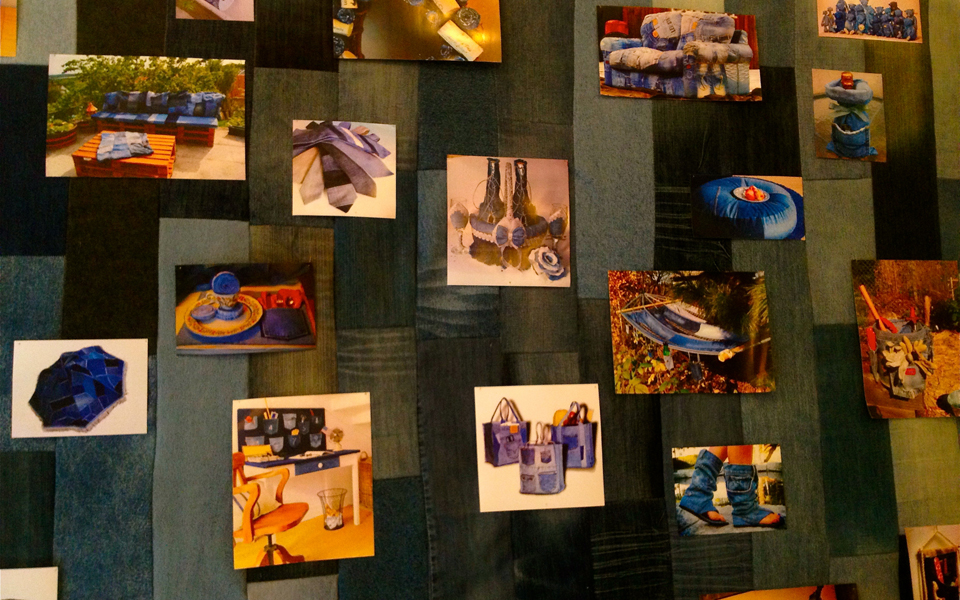 What’s the next step?

For me, real success means that we can organize events on a regular basis. And at that point, I will have to have a team around me, because it would be impossible for me to do everything on my own. Also, the future of Paloma depends on how I can involve sponsors from the private sector.

I’ve already started putting together what we could offer to potential sponsors and I’m planning to actively approach sponsors in the fall. But we’ve already established some partnerships, like the one with TOMS. TOMS is a Greek shoe company with a very smart CSR concept: after every purchase, the company gives a pair of shoes to children in need. So instead of giving money to some charity organization, they give shoes to children.

During the last eight years, they’ve given out millions of shoes to children in need. TOMS approached us because they needed a space for a month for showing their new collection to their wholesalers. A partner like them is more than welcome in Paloma! 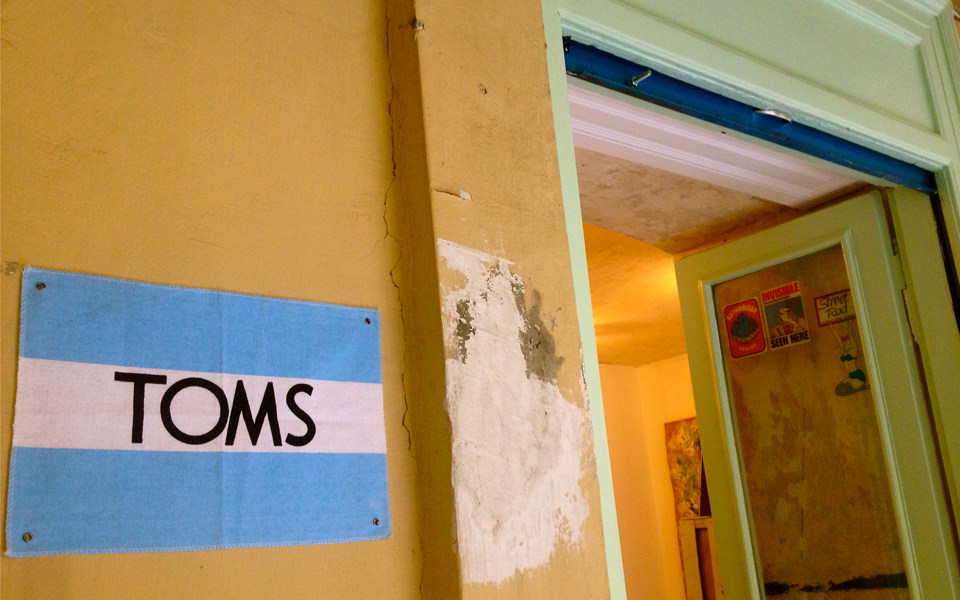 What do you think about the creative industry in Budapest? You decided to start Paloma, so you must see some kind of potential in this field now.

I think there is a lot more potential compared to a couple of years ago. Before my job at Krea, I ran a pop culture magazine between 2003 and 2008, so I’m very familiar with the creative industry and the creative scene in Budapest. Now there are definitely more initiations and projects, and there are also more opportunities. However, unfortunately there is still not enough communication and cooperation between the various actors. I think it’s time to realize that working together makes everything easier.

What are your favorite places in Budapest?

I love riding my bicycle in the city because it gives me the feeling of freedom. With my fiancé, we often go to Daubner, or to Jégbüfé both here on Ferenciek Square and on Lövőház Street. Kopaszi Gát is also one of our favorite places although I think it’s becoming too crowded. And we’ve recently discovered Villa Bagatelle, a great place on the Buda side – that’s where we will have our wedding lunch in August! 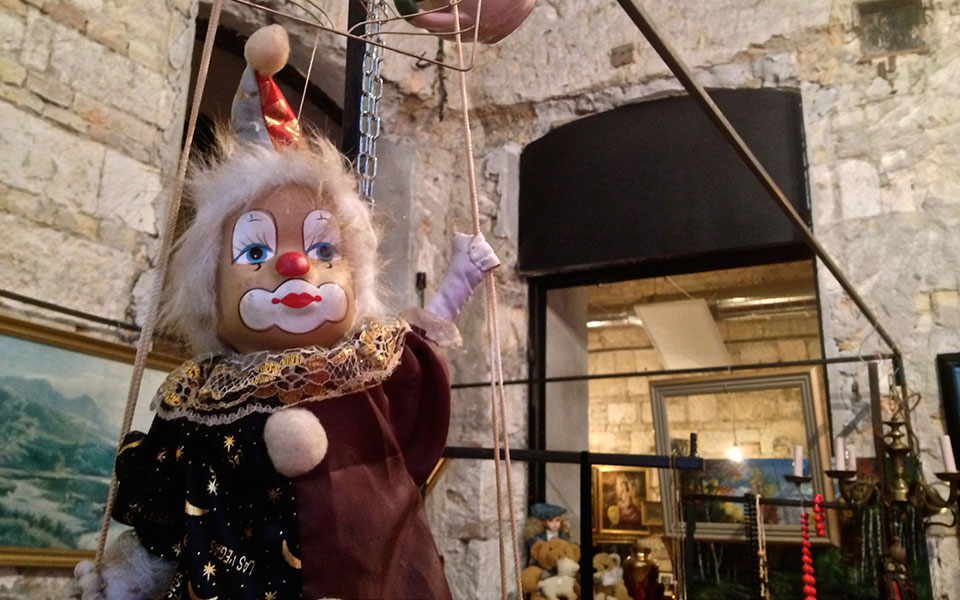 Treasure Hunting in the Heart of Budapest 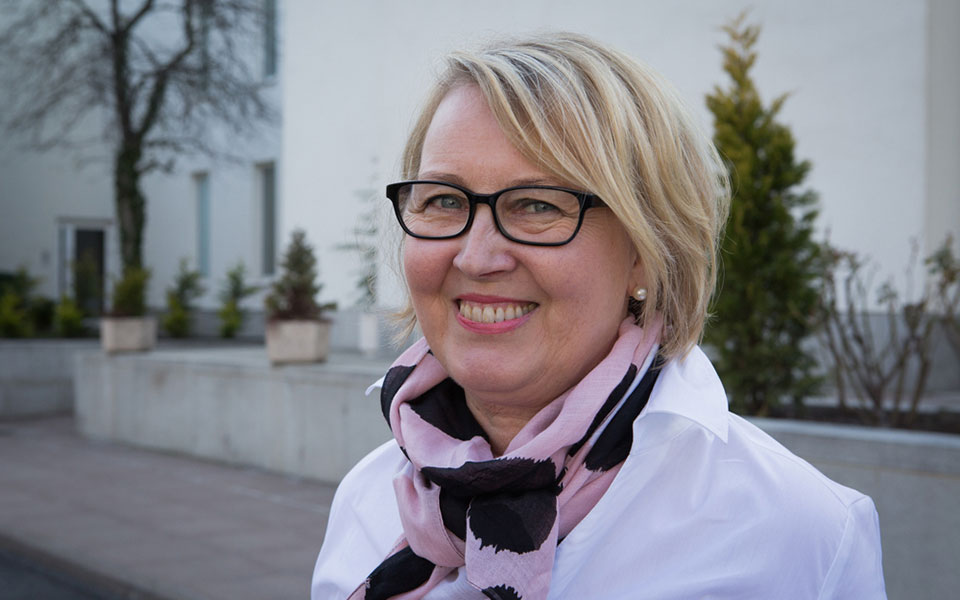