10 Places in Budapest for the Best Retro Experience | Budapest Local

10 Places in Budapest for the Best Retro Experience

While it wasn’t fun and games to live under the Communist regime, where even a careless remark could land you behind bars in the early years, there’s a wave of nostalgia for its places, relics and echoes of a simpler life. For those who didn’t live through the Hammer and Sickle days, there’s a certain charm associated with this retro side of Budapest – particularly for the nostalgic nuances of daily life. If you want to live like you’re behind the Iron Curtain, you can still find echoes of this disappearing world across the city, so get in that Trabant and get ready to travel back in time.

This is where communist statues come to die. You’ll find around 40 statues, busts and plaques dedicated to Lenin, Marx and those from the Hungary’s socialist world, like Béla Kun. This park might be out of the way in the city’s outskirts, but if you want an experience that’s akin to a socialist Disneyland, this is the place for you. All these relics, which were once scattered around the city in various public places as visual propaganda now populate this graveyard of communist monuments.

Take a trip up into the Buda Hills on this retro railway line from Hűvosvölgy to Széchenyi Hegy. While this is a pleasant journey up into the lush greenery of the hills, the Children’s Railway is not just a kitch relic, but one where you find a socialist tradition still in operation.

Constructed by the socialist scouts known as the Pioneers in 1951, the Children’s Railway became a place where good school children could get an immersive experience of what it means to be a responsible worker on the railway. Even today, the railway is entirely staffed by school children aged 10 to 14 years old, except for the train driver and engineers who are adults, that is, for obvious reasons.

Nothing quite captures the retro spirit than riding a trusty old Trabant, an East German car that evokes life in the pre-90s Eastern Bloc. You can still see these cars occasionally rattling around Budapest, and not just carved up into a booth in Szimpla. If you want to drive like you’re in Communist Hungary, you can actually go on a nostalgia trip and rent a trabant for that pure retro experience.

Metro Line 3 looks like it’s about to fall apart any moment, and while it might lack the 100 year plus prestige of the Millennium Line, also known as Line 1, Metro Line 3 also serves as a trip down memory lane. Unlike Line 2, which has been renovated, Line 3 still operates in all its dilapidated glory, complete with authentic rusting blue Soviet-made carriages and its stations which look straight from the movie Kontroll (with good reason, since most of the movie was filmed in the Budapest Underground anyway).

The line was built in the 1970s and 80s, and still captures that socialist feel. Although these cars are due for a replacement soon, so you take a ride while they’re still around!

If you’re looking for vintage and retro memorabilia to take home with you, then head out to Ecseri Piac – one of the biggest flea markets in Central Europe. You can find everything here at this sprawling suburban market, from antiques to Soviet kitsch . Even if you’re not planning to buy, the place is like a living museum and a great locale to get that retro dose you’re looking for. In fact, Ecseri Piac is such a great place that even Ödland, a French band from Lyon has a song about it. Want to know more about this unique place? Check out our short story! 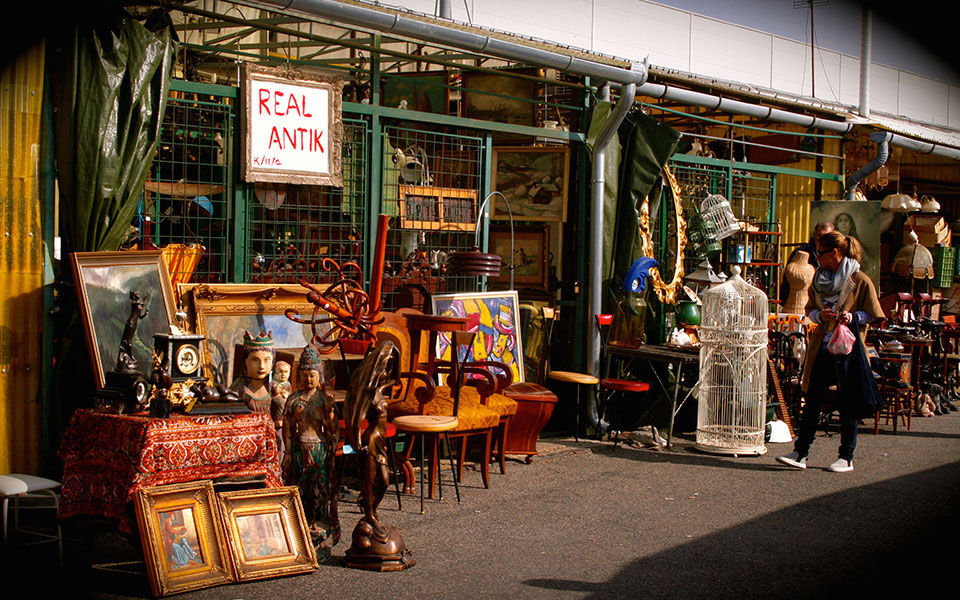 Lovers of analogue photography should make a beeline to Soós Fotó. You’ll not only find old cameras and its accessories, even rare ones, but you can develop film here and also pick up some vintage postcards or photos. This is more than just a traditional photo shop as Soós Fotó feels more akin to a flea market than a normal store.

For those of you crazy about antiques and retro goods, then you’ll want to pay a visit to Falk Miksa Street in the V District, close to the Hungarian Parliament building. You’ll find numerous antique shops and galleries along this street – also famed for its statue of the detective Colombo at the Körút. If you’d rather take home something of value, then you can skip the Ecseri market and take a ramble around the local antique shops in the city downtown. Some of these places are like museums in their own right, so perfect for the vintage spotter.

For authentic Hungarian and Jewish-Hungarian food, pay a visit at lunchtime to Kádár on Klauzal Square. Leave the 21st century behind as you enter a restaurant stopped in time, complete with its retro and kitschy accents, chequered table cloths and old-fashioned soda water bottles. The home cooked food here is an excellent way to taste authentic Hungarian cuisine, and it’s easy to lose yourself and transport you back a few decades. 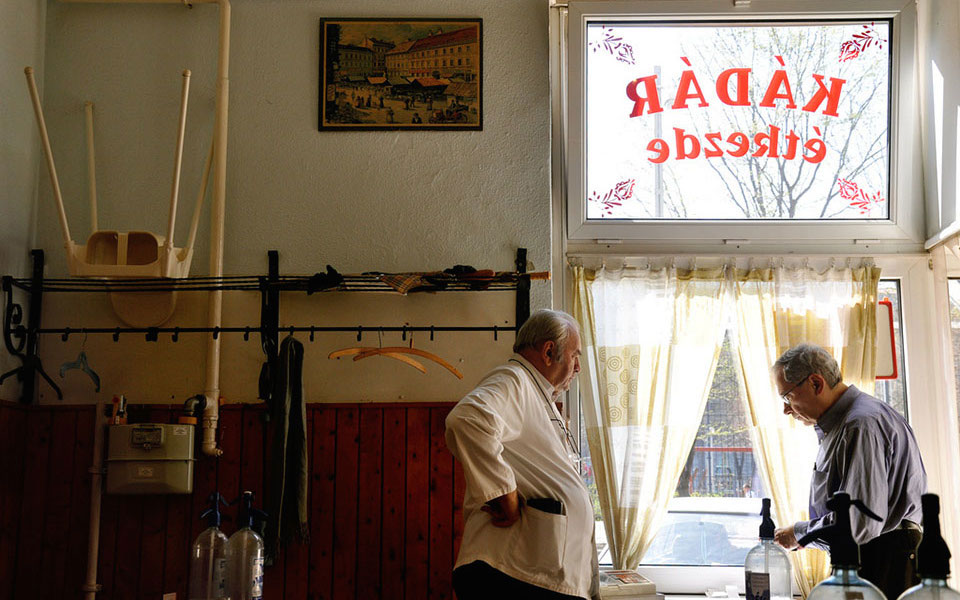 Bambi has been a caffeine fuelled institution that’s been going strong since the 1960s, and still retains its proletariat retro charm. Just like with Kádár, you can escape the 21st century, so sit back with a cup of coffee on one of the red plastic covered seats at one of the few Socialist-Realist cafés still around.

For traditional Hungarian food with a retro feel in City Park, Pántlika is a great spot to enjoy the summer in nostalgia. The curiously shaped pavilion dates back to the late 60s or 70s, being one of the buildings originally built for the International Budapest Fair, and one of the only lasting structures. The bar still embodies its retro heritage, featuring plenty of vintage memorabilia and furniture from the socialist industry, like the Hungarian Socialist Workers’ holiday resort lamps.

ADDRESS    1146 Budapest, Városliget (opposite side of 47 Hermina Street)    SHOW ON MAP
OPENING HOURS    from 12pm to late night daily 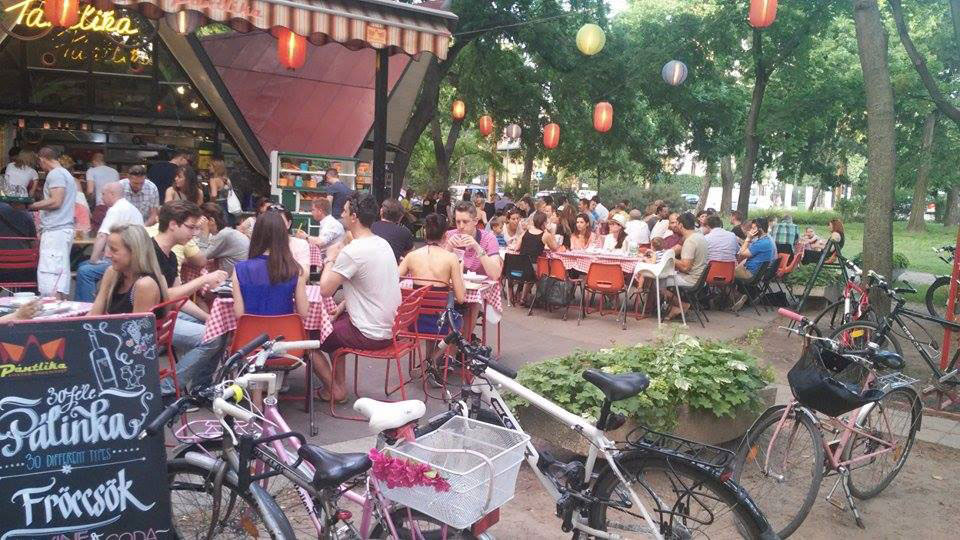