Discovering the Spirit of Hungary: A Trip to the Unicum Factory | Budapest Local

When it comes to drinking through Hungary, Unicum, that iconic dark green orb filled with a bitter herbal concoction, is one of the country’s flagship drinks. While you might have tried the country’s famous (or not so famous) wines, downed shots of pálinka with locals or in Szimpla on a night out or even ventured into the Hungarian craft beer territory, there is no drink more Hungarian than Unicum.

Unicum is not just a drink, it’s the family legacy belonging to the Zwack family, and carries the history of 19th and 20th century Hungary on its back. The recipe is guarded as tightly as Fort Knox, in which only the living members of the family are privy, but one thing we know, it’s an eclectic alcoholic, bitter tincture made up of 40 herbs and spices from all across the world. 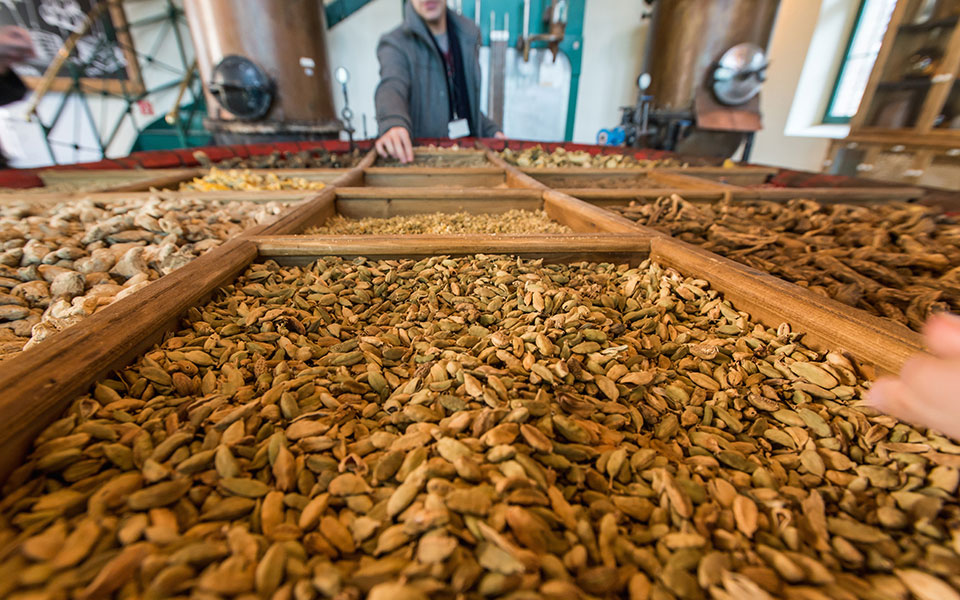 To find out more about this famous drink and its history, we paid a visit to the Unicum factory in the industrial part of the IX District just a stone’s throw away from the Danube river.

The Budapest factory is home to the production of Zwack family’s flagship brand, classic Unicum. While other spirits and wines, distributed under the family name, are handled by factories outside of Budapest, the cellars of the complex house row upon row of barrels painted with red rims that keep the whole production on brand.

Depending on whether you travel in a group or take an individual tour, the order of the visit will vary, but we began our excursion into the world of Hungarian spirits in the museum upstairs. The exhibition traces through the history of the drink, which a certain Doctor Zwack, royal physician to the the Austro-Hungarian Emperor, invented in 1790. Legend has it Emperor Joseph II exclaimed: “Das ist ein Unicum!” which is where the name of the drink took form. But the branding of Unicum came after. 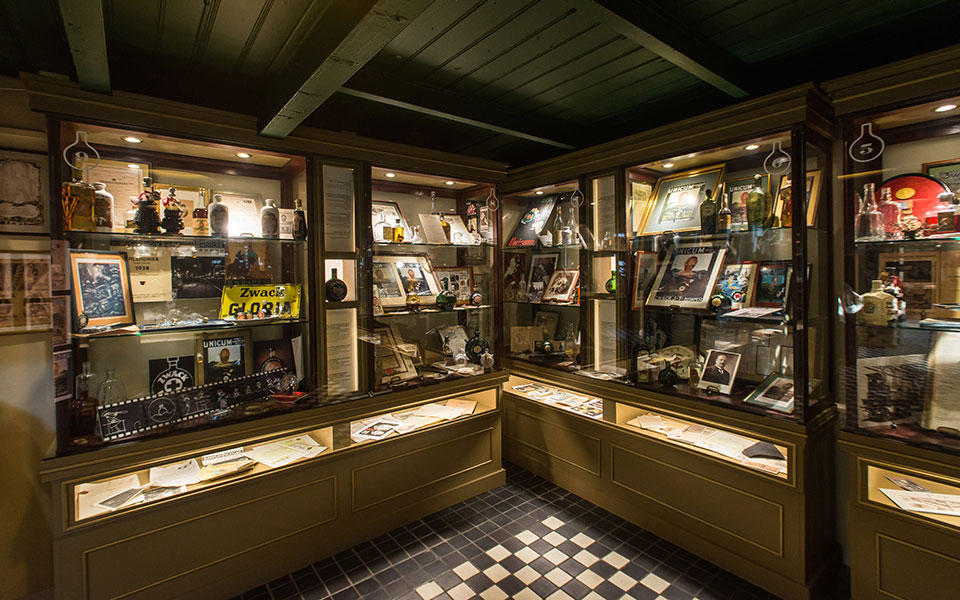 In the museum, a 150-year-old Unicum lies on display instantly recognisable green orb. Inspired by the Florentine orb, and coloured green to symbolise nature and also protect the liqueur, the bottle is a household name with the red cross on it, which was changed to gold after the Zwack family got tired of paying the Red Cross for the rights to use the logo.

Inside this antique bottle, a third of the liquid has evaporated, said to be the “Angel’s Share” leaving behind a concentrated solution of the herbal liqueur in the unopened bottle. This is the oldest bottle Unicum still has in existence. 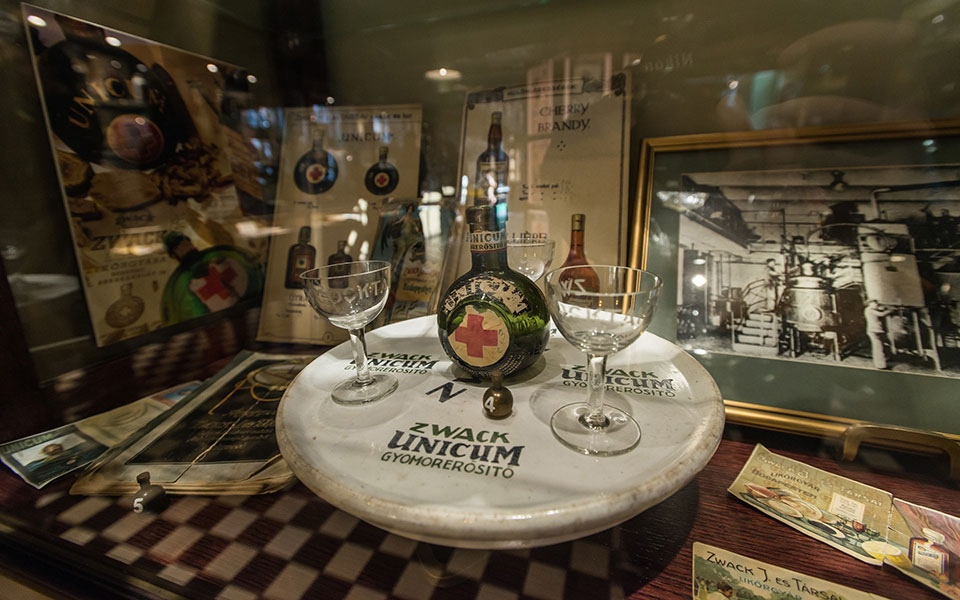 A trip around the museum reveals the tale of the bottle’s history, from the classic advertisement featuring the sailor in the water and the bottle that bobs up and down in the water to the history of the factory and the family. As we trace the history of the Zwack Family, which also ran hand-in-hand with Unicum, we travel back to the wars and the communist uprising, where bottles of Unicum were used as molotov cocktails by the rebelling students in 1956.

The exhibition brings us up-to-date with the Zwack brand and the family’s new concoctions for today, along with the recent reinventions of Unicum such as Unicum Plum and Unicum Next.

In the gallery above, completely unrelated to the iconic Hungarian drink, you can find over 17,000 miniature bottles – the largest collection in the world. 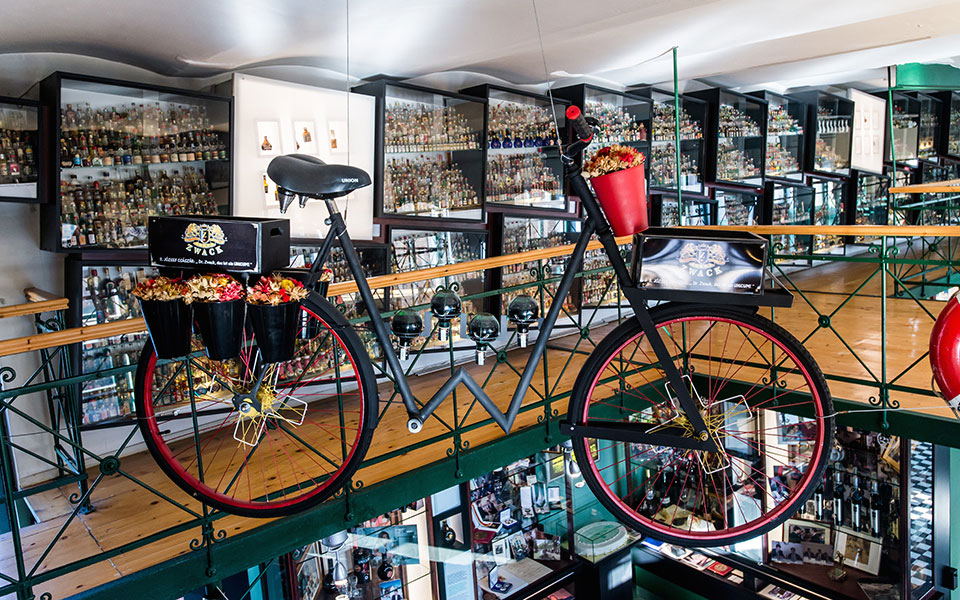 Then came the exciting part – a trip into the cellars and the heart of the Unicum factory. While the recipe of the liqueur is top secret, we could catch a glimpse of the numerous spices that go into a bottle of Unicum. In an outhouse known as the “Heart of the Factory”, we found ourselves in a place that could be be described as a cross between a spice market and a distillery featuring a steampunk aesthetic.

Here, we could sink our hands into the vats of spices and embark on a sensory exploration to different lands by inhaling the aroma of cardamom pods, ginger, liquorice, pepper corns, just to name a few. Above, the actual spices lie in anonymous sackcloths with registrations numbers, but down below, we could deconstruct some of the tastes and aromas found in a bottle of Unicum. 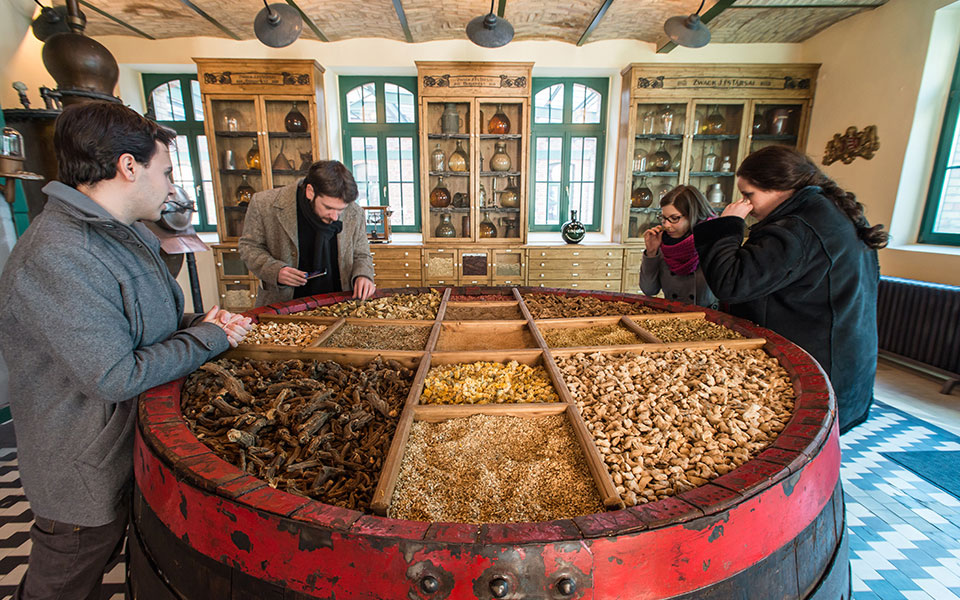 Among the metal tanks and shelves of spices on display, a blackboard highlights the general process for making this bitter alcoholic tonic, where the execution of this secret recipe is made from this blend of spices through distillation and infusing the herbs in two parts, which are then blended with sugar and later aged in oak barrels for 6 months. 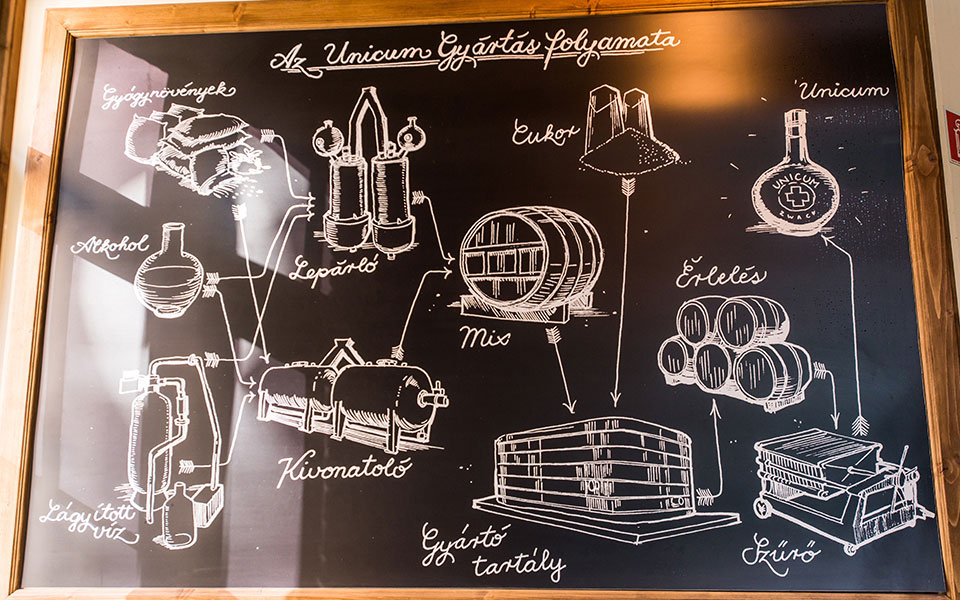 Down in the cellars below, we could see the process in sedate action. Large barrels line the subterranean chambers beneath the factory in Jozséfváros, and the smell of herbs and fermenting sugar hangs in the air. After wandering the musty cellars, we’re given a shot of the sticky, bitter stuff as a taster straight from one of the barrels itself.

While Unicum might be an acquired taste, and not exactly my personal one, the nearby Unicum Szilva, where the Unicum is aged on a bed of dried plums, was more to my palate. The bitter undertones are cut with the taste of plum, making this a great liqueur that could even be mixed in cocktails (and successfully, I might add, having tried it before). 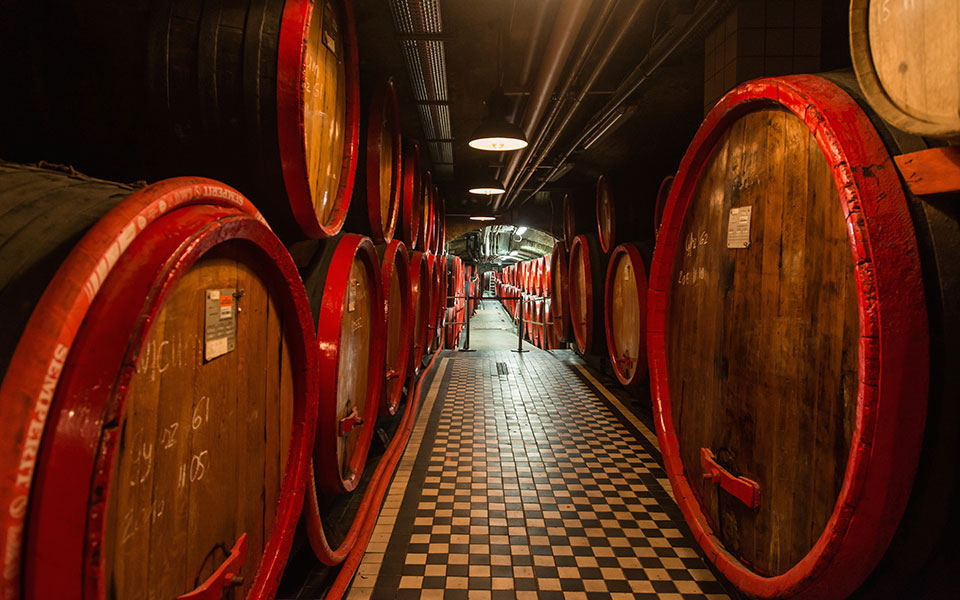 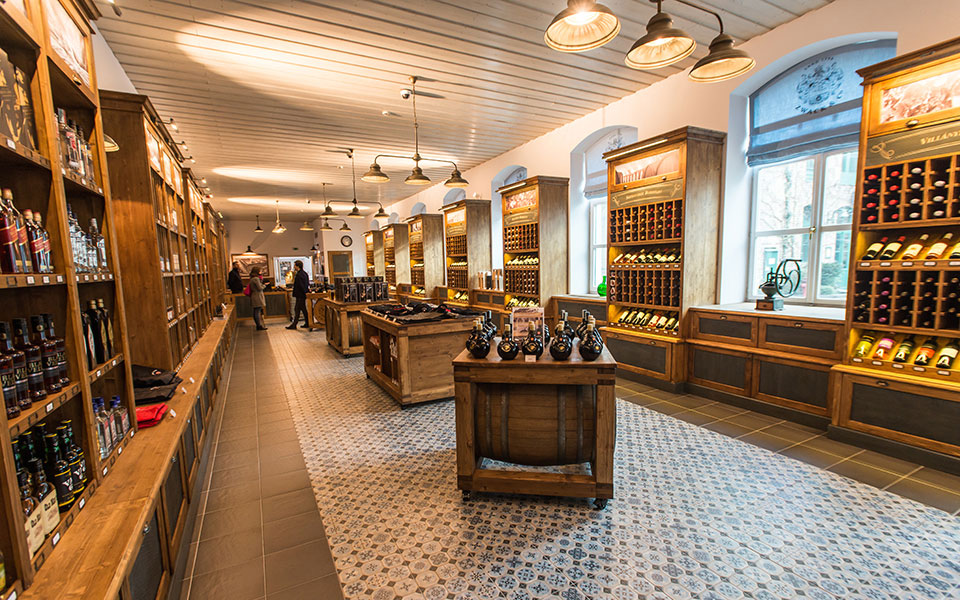 Good thing we had a movie to watch about the family history, since without the Zwack family, there is no Unicum. In fact, we learned during the screening that while the family were out in the United States and the state took control of the Budapest factory under communism.

And, without the original recipe, this “socialist” brand of Unicum was a pale imitation. It was only when the family returned to Hungary after the Iron Curtain came crashing down that their original recipe, and their hereditary passion, resurrected the original Unicum once again – bringing this famous drink that has become synonymous with the spirit of Hungary, in more than one way, back into the country. 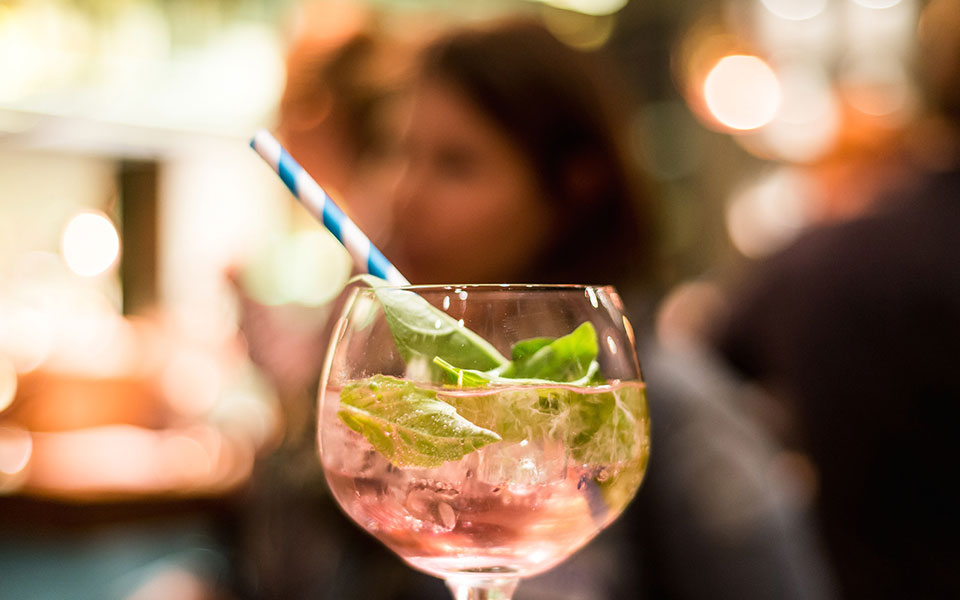